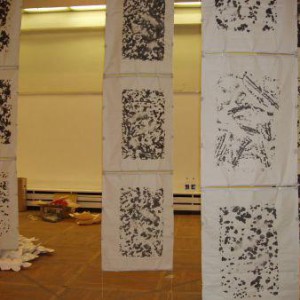 In late 2005, we organized an event presenting Slovakia in Belarus. The project aimed to encourage, through culture, an active communication among both countries presented: Slovakia as a member country of the European Union and Belarus as a common neighbor in Europe. The project intended to create a platform for long-term cultural exchange programs. The Ministry of Culture of Slovakia and Belarus supported the fundaments of this collaboration by signing the agreement on cultural cooperation during the project launch in Minsk.

Within six months, nine events took place in the capital of Belarus, Minsk. The project introduced Slovak culture through traditional arts, music, literature and film, and was an excellent example of how rich Slovak culture is. Artists presented their works created especially for this project. Presentation of Slovakia in Belarus began by celebratory concert in the Belarusian State Philharmonic on 18th October 2005. The Belarusian Symphony Orchestra was led by Slovak conductor Anton Popovič and accompanied by Slovak soloists Juraj Bartoš and Juraj Čižmarovič.

Artists from Slovakia, Poland, Austria, Germany, Japan and Australia exhibited their works of paper art in the Palace of Art. Also exhibitions of The Contemporary Slovak Graphic Art and The Current Slovak paintings and sculptures were successful. The curator of both exibitions was Dr. Pavel Urban.They presented works of Dorota Sadovská, Viera Šindelářová, Marek Kianička, Peter Gregvorek, Stephen Kubovič, Jana Farmanová and others. Further, White greeting for Belarus presented then current documentary film show called The Week of Central European Cinema. Documentary and animation works of the students of Academy of Performing Arts in Bratislava awarded from international and local film festivals were shown as well. The program was prepared by Martin Ciel, Associate Dean of the Academy of Performing Arts.

The first of a series of literary discussions titled Let’s get to know your literature with Dado Nagy took place in November. It was devoted to original literary works. Furthermore, Slovak Roma ethnic group opinion leaders traveled to Belarus in November. They shared their experiences with members of the Roma minority in Belarus.

Slovak imaginative photo exhibition had taken place at the National Museum of History and Culture of Belarus since the end of January. It was prepared by director and photographer Miriam Petráňová. One lecture took place at the Belarusian State University of Culture and Arts as part of the project.