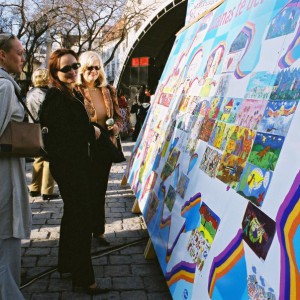 In 2004, the project, We Can Give, built a symbolic, but visible bridge to overcome the social barrier between Roma and majority society. The project involved inhabitants of 62 settlements all around Slovakia, and 12 non-governmental organizations. The project’s symbolic message was: “We want to share our sense of life in a way that is close to us. This speaks of ourselves, our traditions, and it represents our present days. We can enrich each other.”

To express the message of We Can Give, we chose silhouettes of figures, symbolically heading towards the future /2×5 m/. The silhouettes were created by the academic painter, Vladimír Popovič, and they were filled with paintings by settlement inhabitants. The other side of the silhouettes was formed by pictures of those who participated in its creation and of those who joined to express this message. Each painting represented what Roma from different settlements or municipalities have to offer – music, dance, singing, traditional meals, crafts, embroideries, etc.

The silhouette was assembled continually from the 15th of February 2004. The final phase was held in three Slovak cities: Košice, Banská Bystrica, and Bratislava. It was completed on the 25th of May in Bratislava, where authors added the last three paintings.

Project We Can Give brought together Roma people in Slovakia and brought new feeling not only for them, but for the whole society. We Can Give and we can contribute to the creation of an atmosphere capable of overcoming the barriers between Roma people and the majority society. It was a manifestation of the need to communicate, to comprehend one´s values, and the ability to do something and pass it on.