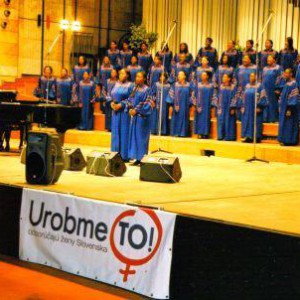 The campaign, Let´s Do It! was first brought to the public’s attention in April, 2002. The emergence of the project, Let´s Do It, was encouraged by the following non-governmental organizations: Professional Women, the Association for Support of Young Families, the Association of Roma Women in SR, the Slovak Academic Information Agency, and the National Centre for Equality Between Women and Men. The aim of the project was to focus attention on the status of women in society, and to increase the interest of women in dealing with their problems through active and responsible participation in public affairs.

The campaign persuaded women not only of the need for their involvement in public life. It also helped them to solve social, family, professional, and personal issues. Besides the media, the campaign paid attention also to direct contact with women. From the 21st of August to the 19th of September, we prepared public forums in 22 Slovak cities. Three concerts dedicated to minorities were also part of the campaign.

The campaign continued in 2003 in the form of a movement, which created separate coordination centers in several cities in Slovakia (Banská Bystrica, Dunajská Streda, Martin, Michalovce, and Poprad). A tenth of organizations from the third sector, entrepreneurs, and even individuals – men and women – joined. Some were asking for help; others were offering it.