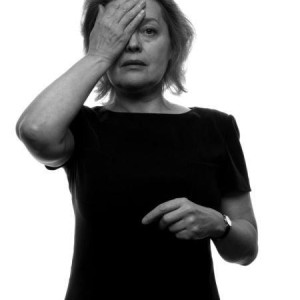 We introduced the project, Don’t Cover Your Eyes, at photography exhibition which opened on the 19th of May 2005 in Bratislava. The exhibition displayed a series of portrait photographs by Ľubomír Špirko, the aim of which was to draw the public’s attention to the problem of domestic violence. The exhibition presented 40 portraits of famous and unknown Slovak personalities symbolically covering one eye, to express their support for the fight against domestic violence.

“Photographs are a strong medium. The portraits you can see – well known and unknown – depict, as we wish to, that there are themes that we don’t often see and sometimes don’t want to see. But the fact that we can’t see them doesn’t mean that they don’t exist,” stated Ľubomíra Slušná, the ACEC president.

Kirk Collingwood, general manager of Philip Morris Slovakia, also commented on the issue of social responsibility: “Responsible behavior of a society means a focus on social issues. It also means cooperation with relevant organizations and people in order to alleviate such problems. We recognize that domestic violence is a hidden social problem and a challenge for any society.”

“The main aim of the Don’t Cover Your Eyes project was to draw attention to the reality of domestic violence being present in society and that it is up to each of us as to whether we wish to acknowledge what is being played out in our families or in families close by, or if we prefer to look the other way, “ said Ľubomír Špirko.

The exhibition was subsequently presented at the United Nations in New York in the USA. Lucia Šimončičová was its curator in New York and Bratislava.