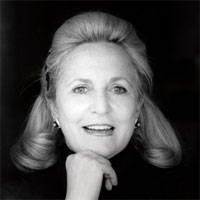 Barbaralee Diamonstein-Spielvogel is active in the fields of art, architecture, historic preservation, and public policy in the U.S. She is the author of 23 books, and recipient of numerous honors and awards. A former White House Assistant, the first Director of Cultural Affairs in NYC, and the longest serving Landmarks Preservation Commissioner in NYC.

In 1996, she was appointed by President Clinton to the U.S. Commission of Fine Arts, where she served as the first woman Vice Chair in its more than 100 year history; she also serves on the American Battle Monuments Commission; New York State Council on the Arts (Chair); the Trust for the National Mall.

She was a member of the NYC Cultural Affairs Commission, the NYC Public Design Commission (formerly the NYC Art Commission), and the High Line Elevated Park, NYC, where she was a founding director for nine years. Diamonstein-Spielvogel has been the chair of the Historic Landmarks Preservation Center since 1995

She is the founder and Chair of the NYC Landmarks50 Alliance, a consortium of more than 185 organizations formed to commemorate the 50th Anniversary of the passage of the NYC landmarks law.