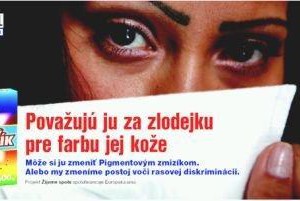 The project, Living Together, was implemented between 2005 and 2007. It consisted of a media campaign and an educational campaign at schools. Our aim was to actively create a feeling of responsibility and involvement, to eliminate the general xenophobic attitudes, prejudices, stereotypes and discrimination of the majority of society towards the Roma minority through active public and media engagement.

The project’s focus was primarily on a target group of children between 10 and 15 years of age – secondary school students. The reason we decided to focus on school children was the fact that at this age, a young person is adequately equipped – both emotionally and in terms of awareness – to not only be able to receive information, but actively process it. On the other hand, they are still sufficiently flexible and able to change their attitudes. In terms of the secondary school program, we assumed that parents and teachers would be inadvertently involved. As a means of motivating the target group and getting the general public involved we chose a media campaign as a form of support resource for the educational campaigning in schools.

The Living Together project’s message was presented to the general public as TV spots and a print media campaign. In primary schools the project’s message was presented as a film, a computer game and methodological manuals for teachers of ethics. Part of the project was an art competition for pupils of primary schools on the topic of tolerance and coexistence, which finished with a cultural program and award ceremony at the elementary school in Detva.

In June 2006, we carried out a trans-national collaboration involving activities in the village of Krížová Ves. The output of this collaboration was seven stories of the settlement inhabitants. The resulting films were posted online and presented at a concert during the European Week of Media and Diversity in March 2007 on Slovak Radio in Bratislava.